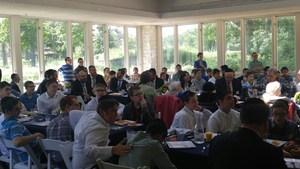 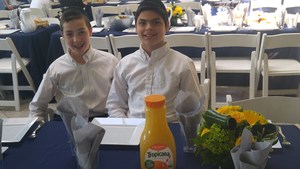 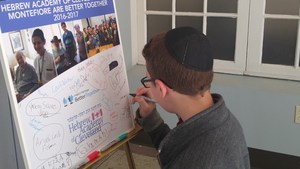 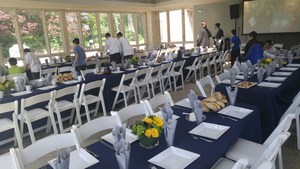 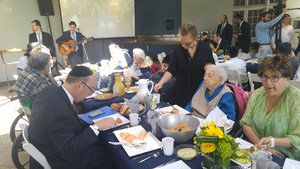 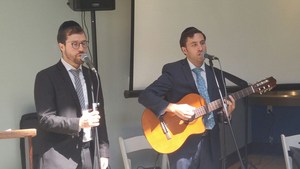 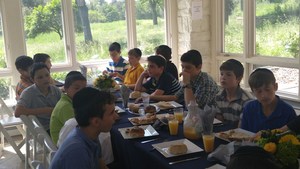 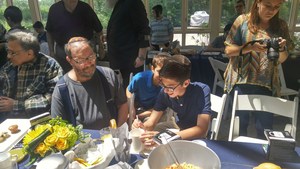 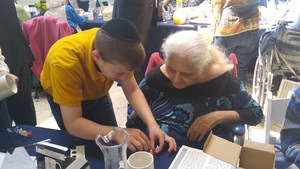 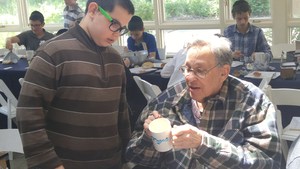 On Friday, June 9th at the Oakwood Campus, the 7th and 8th grade boys celebrated with residents of Menorah Park and Montefiore, their rebbeim, and administrators as they concluded their year of intergenerational programming as part of the Better Together program.
Residents were greeted at the door by the 7th and 8th graders and entered the cafeteria which was beautifully arranged with fresh flowers and featured a delicious brunch. In his opening remarks, Rabbi Dessler spoke about the hallmark quality of chesed and how the boys work with the elderly as part of the Better Together program personifies this quality.  Then the HAC Better Together video was shown, produced by Dovid Stern of Cleveland Creative Outlet, that tracked the boys progress over the year via student interviews.
Akiva Gecovich presented a poster featuring a picture of himself putting a note written by resident Mr. David Ramser into the kotel, as well as a Jerusalem snow globe to Mr. Ramser. Mr. Ramser accepted his gift with a dvar Torah about the parsha and a message of thanks and appreciation to the boys for visiting him and other residents over the year.
Next, silver medals were awarded to Shalom Dym, Tzvi Lebovics, and Yossi Maimon, the runners up of the Better to Write Essay Contest. Menny Greenberg, the gold medal winner and recipient of a $1500 prize to sleepaway camp, read his winning essay to a very well-received audience.  Mazel Tov, Menny!
A.Y Nakdimen and Avi Lampert provided the musical entertainment and the boys enjoyed painting mugs with the residents and singing and dancing  to the music as the inspiring and enjoyable morning concluded.
Thank you to Mrs. Alex Fleksher, Mrs. Suri Goldman, and the 7th and 8th grade rebbeim for making the Better Together program such a success this year.